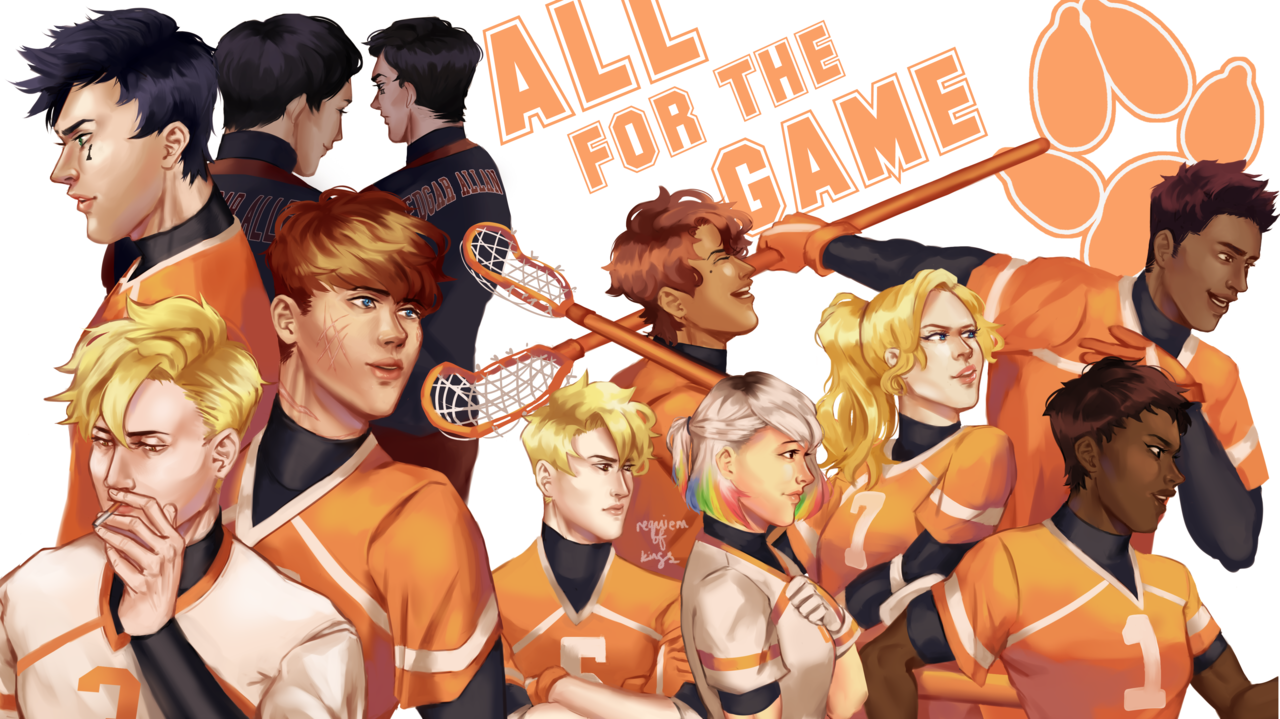 Today I am talking about my new favourite series, AAARGHH I JUST LOVE THIS SO MUCH I CAN’T.

The All For The Game series has 3 books and is written by Nora Sakavic. This is a self published series and it is amazing!!

Why I love it:

Neil Josten: the main character who I love very much. “My very survival depends on hiding but someone is being a bitch so I am going to call them out on it on TV for everyone to see” *repeats with improved insults directed at violently inclined boy* This boy was not made to be discreet and he is amazing!! (whispers *I love him*) 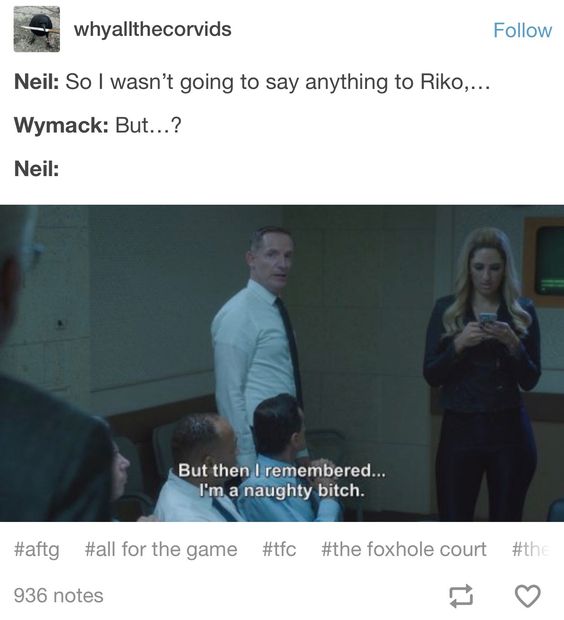 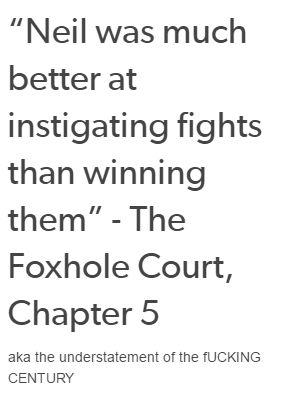 Also I love how Neil was there to make no friends, stay detached and just play some sport but then he met them and just starting help them with their issues. 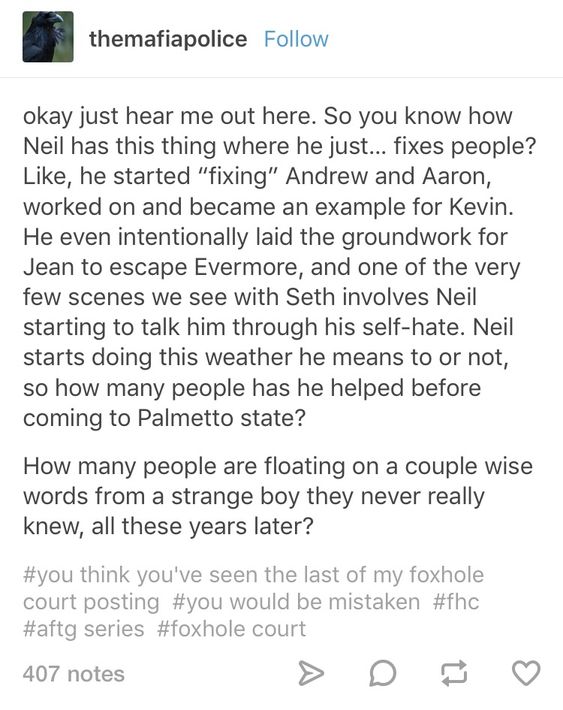 And Neil’s development from always being alone and never trusting anyone to I want to go home and save more than myself from zombie apocalypses. I love characters growth and well he had a great one. And I loved watching him open up to people and work to make connections.

Wymack: ahhh Coach Wymack, that poor angel! He is just there looking after everyone and letting them have their own space. He is the perfect coach for this group of troubled players. He would always be there and he is precious. I love how he isn’t standing there saying this is the plan to make you feel better but still makes them all feel better. Nothing is too much to ask from him and wow!!

Kevin Day: poor baby loves exy so much, it’s adorable. Kevin to himself: I ask myself if the life decision will improve my exy skill and if the answer is no then I don’t do it, simple.

I love how he is constantly telling the team to improve and tells them all what they are doing wrong as well. 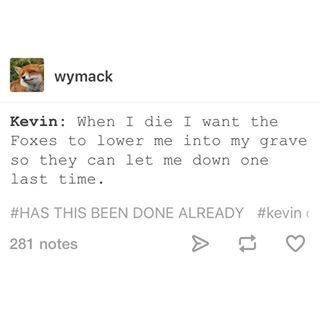 I feel like the story handled Kevin’s situation really well because I imagine after years of emotionally abuse and physical abuse it would be really hard to break that. He had panic attacks, problems standing up for himself and scared of the repercussions of rebelling. It showed the strong-hold the abuser can have over the victim. And I think that explains why he loves exy so much and in the end when he spoke out to the press and covered his tattoo made me feel all the more proud. And I am SOOOO glad he got to work on his issues and he deserved that. And I loved that Andrew helped him feel ok and safe for a while which is just argh, people helping people, I eat that stuff up.

Andrew Minyard: Andrew *I am going to protect everyone but myself* Minyard. What an absolute saint, except murder is his answer to a lot of problems so saint and sinner. Obviously reading this series I know most of Andrew’s behaviour is not good or admirable at all. But as a reader I loved reading about him; he pushes people away, rejects help, is closed off, secretly helping people and trying surviving his own traumas. I would hug him but I’ll just send Neil to him. He is so well written with his complexity of the past and what shaped him into the person he is.

And I love how he just steps up to protecting people from anything, crime boss attacking you, don’t sweat it I’ll stop them, like who does that, Andrew Minyard that’s who… 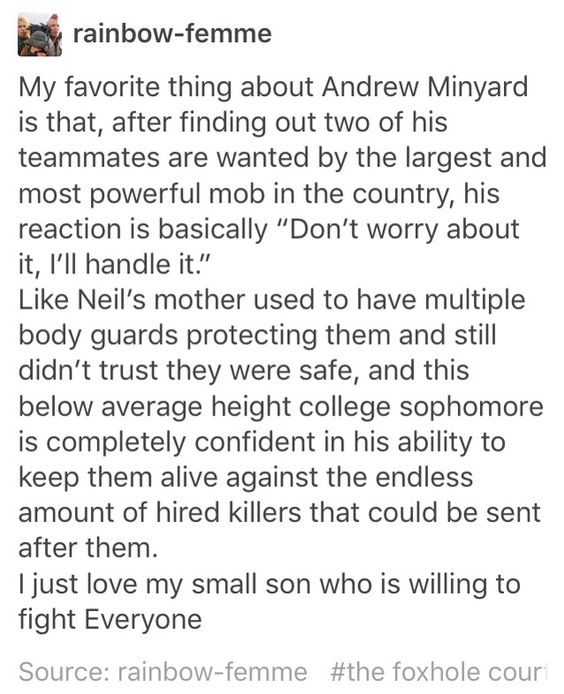 Aaron Minyard: twin to Andrew who has a very complex relationship with him, where he feels like it is hate but really it is love and protection. I was interested in the whole reveal about the twin’s relationships and I am glad they could work through their lack of communication in the end and get closer. 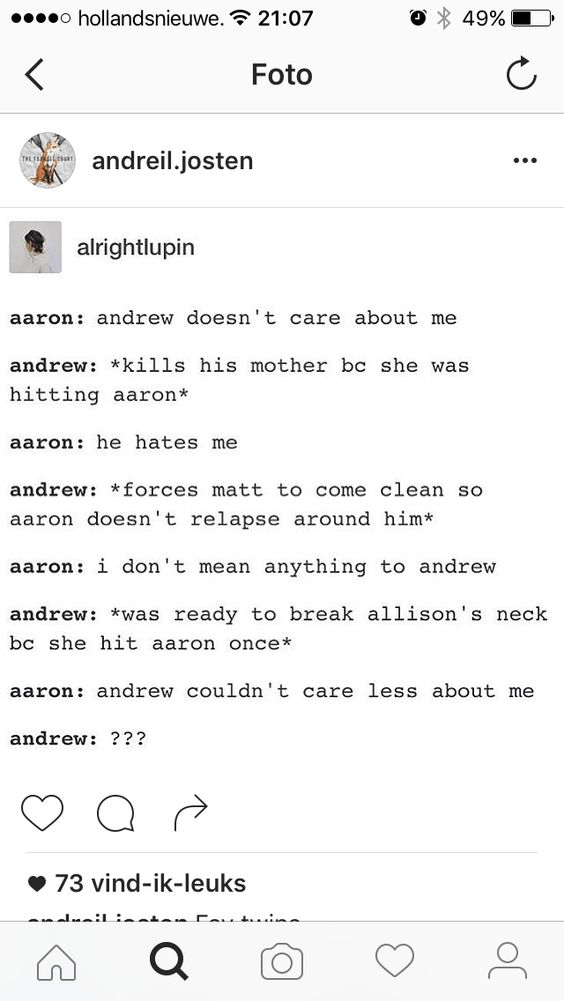 Nicky Hemmick: he is so cheerful and pure with his intent to make everyone get along.

And obviously he has had a complicated past with his family and everything but he still is trying. He deserves a hug. And how he stays around to try and get his cousins to be friends definitely describes Nicky. Even though most the time he gets a knife in his face for his effort (which describes Andrew). But, yes, Nicky is so pure!!

Dan and Matt and Renee and Allison aka the upperclassmen: the other side to the fox’s who have the friendlier approach. I really liked all of them. Dan being the captain and bringing the foxes together. Matt who would always protect Neil. Allison who buys them all a holiday (why can’t I have friends like her) and Renee who is an absolute saint. I love how she was kind of the upperclassmen’s version of Andrew and how their past showed what a happy home could do to you to help move on. She was willing to protect them all (yes she will kill for her friends) and she could talk to Andrew which I really, really liked.

I am a big lover of people who think they can’t have love or think no one will love and basically gone on a mission to reject love BUT then someone comes along and they can’t help but fall. And they think they can’t love someone like this and it doesn’t make sense why someone loves them. But it makes complete sense because they are perfect together. I love that trope (if you can call it a trope???) and this one had a great one so yes I devoured it!!! 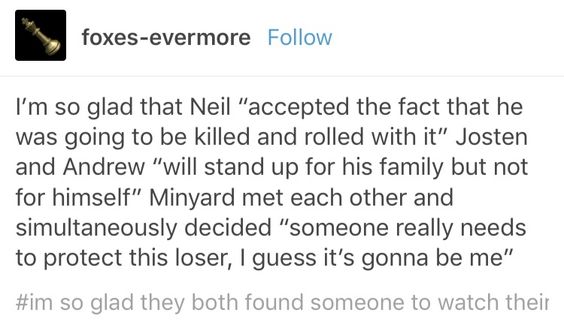 I love how Andrew is just like ‘you can’t control me’ and ‘I do what I want’ but then Neil asks and he is like ‘fine’. It is just amazing and I love everyone else reactions to this, I don’t understand…. you asked and Andrew did it…. but that’s impossible Neil. Tell us the truth.

And then to sum up it Andrew and Neil are great at talking to each other. I mean, come on, some of the things they say to each other are just beautiful. Andddd they navigate each other so well. Especially Neil, this is one of the best ⇓⇓ 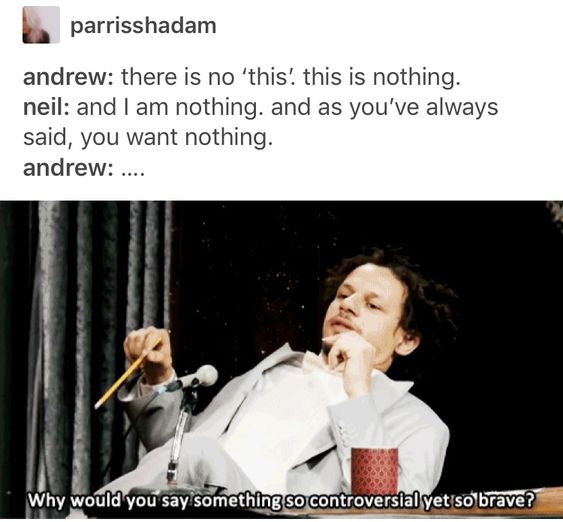 THE ENDING: the last book of a series have a lot of pressure as we are all waiting to see how it ends and this is one of the reasons this was done so great— I have seen someone wrote a post about this on Tumblr where they said that the ‘big bad’ end to do with Neil’s father wasn’t left until the last minute so it didn’t feel rushed and you got to see the aftermath of it– which was getting to see the foxes becoming closer which was great and was really important for the characters.

And at the very end Andrew protecting Neil (which relates to how their first met as Andrew hit Neil with a racket *how romantic* then in the end Andrew saved Neil by hitting someone else with a racket). Also I would love to know what Andrew was thinking when Neil was knelt on the ground near Riko at the end of the match— ‘ok he is exhausted. Have to keep a eye on Neil. He said he didn’t want me to protect him but Riko is near him and frustrated. I’ll be on guard. Oh god Neil *insult every dangerous, murderous criminal there is* Josten is opening his mouth to talk to Riko *bitchin* Moriyama. This is only going to end one way. I need to attack because no one is hurting my Neil.’— I imagine his internal thoughts were something like that.

This is definitely a series I want to reread. I just love it so much. ARGAJFASKLGH. I am not okay!!

Thank you for reading!

9 thoughts on “ALL FOR THE GAME | My new favourite series”